The universe is always throwing random curveballs at us puny humans, something that we find very hard to accept. We’re always looking for explanations for the weird, coincidental, and sometimes evil things that befall us.

Occam’s Razor, the idea that the simplest explanation for something is usually the correct one, just doesn’t cut it for some people. They need to know that there’s a reason, a plot, nefarious manipulations by persons unknown, that’s the cause of our suffering and confusion. They believe that bad things just don’t happen; someone or something must be behind it. Once they start pulling on threads, they begin to find “evidence” and “truth.” Before long, a conspiracy theory begins to form.

Such theories have been around for centuries, with tales of the Knights Templar, Freemasonry, and the Illuminati. Modern conspiracy theorists focus on the assassination of JFK, the Council of Foreign Relations, the Bilderberg group, whatever goes on behind the scenes at the Davos meetings in Switzerland every year, chemtrails, Sandy Hook as a “false flag,” fake moon landings, flat-earth proponents, anti-vaxxers, and the “truth” behind 9/11. (“Controlled explosions! And how do you explain the collapse of WTC 5?”) And don’t get me started on all the QAnon nuttiness.

Thanks to the internet, there’s hardly an area of society untouched by some kind of conspiracy theory. That includes music.

According to researchers, Paul McCartney has been dead since Nov. 9, 1966 (or perhaps Jan. 7, 1967), when “he blew his mind out in a car.” The Macca we’ve seen since is a Canadian-born imposter. The truth, they say, can be found in the lyrics and artwork of Beatles material from Sgt. Pepper onwards.

Jimi Hendrix was murdered. Jim Morrison faked his death to escape the pressures of being in The Doors. Same with Elvis. You’ve heard about the suppressed, top-secret, 633-page FBI report on his whereabouts, right?

Those are the golden oldies. But in recent years, new music-related conspiracies have appeared. Here are five of my favourites.

Thousands of people witnessed Dave Grohl tripping and falling off the stage during the second song of a show in Gothenburg, Sweden, in June 2015. After having his leg set by a paramedic, he returned to the stage to finish the gig the best he could. But once he was able to get a proper examination, doctors told him he needed to take time off to let the bone knit. A huge swath of shows was cancelled, including a big Wembley Stadium show (I had tickets for that one, too). Later in the summer, Dave returned to the stage sitting down in his majestic “Dave of Thrones” perch and the Foo Fighters finished out the tour.

However, there are those who believe that everything was a ruse to gin up more publicity. The X-rays of Dave’s broken leg were faked. The “accident” was exploited to sell posters and T-shirts. And the hype around the cancellations and the Foos return was used to boost ticket sales — which, the theorists insist, were soft for this tour.

Nice try, but the injury was real and the tour was already pretty much 100 per cent sold out. The truth? Dave was just clumsy.

2. Lorde isn’t as young as she claims

When she appeared with her Pure Heroine album in 2013, people were astonished that a 16-year-old could write music with such insight and gravitas. “Only someone with an old soul could pull this off,” they said. These folks point to some old interviews where Lorde says she prefers to go by the name “Ella” (well, that is her given name) and that she’s actually 45 years old. This rumour found its way to the guys at South Park who ran with the story, alleging that Lorde really is a 45-year-old geologist named Randy Marsh.

There’s no doubt that David Bowie was a visionary (gender fluidity, digital music, social networking). But overlooked until recent years was his prediction that the world would soon see the rise of Kanye West. How so?

One of the most famous album covers is that of his Ziggy Stardust and the Spiders from Mars. The photo was taken on Heddon Street, just off Regent and not far from Picadilly. Above Bowie’s head is a sign for a furrier store named (gasp!) “K.West.” That’s clue one. And could Bowie be hinting at a secret quest? (KWest-Quest. Think about it.) 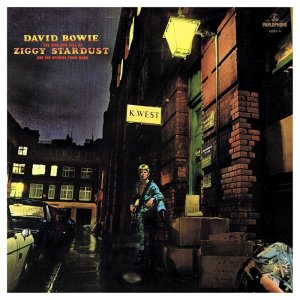 Second, the album features the song Five Years, which promises the appearance of a Starman who will save us all from ourselves. Almost five years to the day after Ziggy was released (there is a plus-or-minus fudge factor of about a week, depending which date you choose for Ziggy’s appearance in stores; close enough, though), Kanye Omari West was born in Atlanta.

Fast-forward to the end of Bowie’s career and the release of his last album, Blackstar. What is Kanye? A Black star, of course. And how do we know he’s referring to Yeezy? Because of the line “I’m a Blackstar, not a gangster.” Well, then.

There’s more, too. The K.West sign was purchased by an anonymous buyer said to have music industry connections. And when Bowie died in January 2016, Kanye was among the first to post a tribute on Twitter. Case closed, apparently.

There have been many conspiracies surrounding Kurt Cobain’s emphatic rejection of his place in the music business in 1994, many of which have to do with his alleged murder. But we’re not going there because Kurt is actually still alive — and that’s he’s hiding in plain sight.

One school of thought that took root deep within Reddit says that Kurt and Rivers Cuomo from Weezer are the same person. Need proof? Weezer once played a secret show under the name Goat Punishment in which they performed nothing but Nirvana covers, including some very deep tracks. Who else would think of that but Kurt? What about that rumour that Rivers/Kurt was rehearsing with Dave Grohl and Krist Novoselic for an appearance at Coachella?

“Phht,” say other Kurt-is-alive researchers. “He’s living and performing in Peru under the name Ramio Saavedra, who has been known to cover Nirvana songs on local TV. I mean, just look at him! He’s Kurt’s doppelganger!”

The one big flaw in these arguments? Both Rivers and Ramio play the guitar right-handed. Kurt was a lefty.

Just for fun, though, here’s Weezer performing as Goat Punishment back in November 1998. Damn, but they sound like Nirvana…

The official story is that teeny beauty queen JonBenét was found in the basement of her parents’ home in Colorado on Christmas Day, 1996, some seven hours as she was reported missing. The cause of death was asphyxiation and a broken skull. Despite the massive investigation into her death and all the media coverage, the case remains unsolved. Could it be that she’s actually still alive?

Theorists believe that she was kidnapped (perhaps by the Illuminati, I kid you not) with the cooperation of her parents, who then staged her death. JonBenét remained out of sight until 2008 when she resurfaced under the name Katy Perry with the song I Kissed a Girl.

Amateur YouTube forensic types point out the facial similarities between Perry and JonBenét as well as the resemblance she has to both Mr. and Mrs. Ramsey. I mean, just look at the eyebrows! They’re the same! And why would Perry include this line in her memoir: “Not that I was one of those stage kids. There was no JonBenét Ramsey inside of me waiting to burst out.” Whoa, huh? And wait? Didn’t Katy and JonBenét also sing God Bless America at one point in their lives?

GOD BLESS AMERICA! LAND THAT I LOVE, STAND BESIDE HER AND GUIDE HER! I'm so happy I could cry. A WHOLE 6 days to sleep w/ KITTY PURRY!!!

The genesis of this story was a now-deleted YouTube video entitled “JonBenét Ramsey is singer Katy Perry.” Other researchers jumped on the idea, expanding on the theory until it came to the attention of entertainment news sites.

No one pushing this theory has reconciled the fact that JonBenét was six when she died. Katy Perry was a documented 12-years-old at the time.

READ MORE: The great 440 Hz conspiracy, and why all of our music is wrong

If you’re so inclined, I can direct you to a number of additional conspiracy theories.

Alan Cross is a broadcaster with Q107 and 102.1 the Edge and a commentator for Global News.