How A Shelter Dog Taught Me How To Live Again

Four years ago I was struggling with serious depression, I could barely get out of bed or leave the house; I ended up losing a full year, swallowed in the darkest spot I had ever been in. Through small steps and a lot of patience and support from my family, I was able to get myself sort of back on track, but I didn’t fully bounce back until we made “Grizzly” part of our family. We had lost our dog Butterscotch just before I fell into my year long depression, and I wasn’t sure I wanted to adopt another dog; after all, Butterscotch had made me her person, and the hole she left in my heart was huge. My wife and son started talking about bringing another dog home to be part of our family, because they thought it might help my recovery if I had a furry face to occupy my mind; and that’s where Grizzly comes in.

We had decided that we were going to adopt from a shelter, because that’s what we had always done; we found a dog we wanted to meet and made the trip to visit him, only to find out that he had been adopted just prior to our arrival. On our way into the shelter we had seen a dog just quietly standing in a run by himself, looking at us with some kind of interest; when we were headed back to our car he was still in the run by himself, but he had made his way over to the fence closest to us. This quiet, skinny dog, with a rather oversized head locked eyes with us, and it was in that deep stare that he somehow told us that we were going to be his new family… it was an instant bond. We headed back into the shelter and asked about the curious dog outside; we found out that his name was Grizzly and he had been at the shelter for about a week. Grizzly was just a little over a year old, which contributed to his small size and larger head… he just hadn’t grown into it yet. We filled out everything we needed to and waited to be approved to take Grizzly home with us.

Grizzly officially became a part of our family three years ago today (August 9, 2019), and that’s when he started to teach me how to live again. I had still be hurting a lot from the depression and it was as if Grizzly had sensed it, because as soon as I sat down in my chair the first day, he climbed into my lap and rested his head on my chest, exactly over my heart and closed his eyes. It seemed odd, but the weight of this new furry friend on me, made me feel lighter in heart than I had in over a year. Grizzly quickly made me his person and wouldn’t do much without me, and it didn’t take long for us to create a way to communicate with each other. Just having this new friend to keep me occupied through playing, taking walks, and cuddling in my chair, had me distracted enough that I began to forget about all the things that had been troubling me. Grizzly had brought me through the other side of a very dark place, in a way that only a dog can, by giving unconditional love and attention.

It’s been three years, and Grizzly still finds his place in my lap so that he can rest his head on my chest, every single day… and I wouldn’t have it any other way. The furry goofball is my best friend.

By the way, Grizzly finally put on some weight and grew into his head. (pictures below) 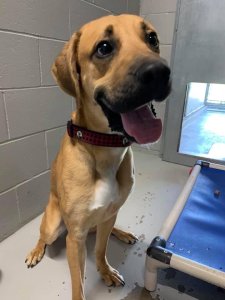 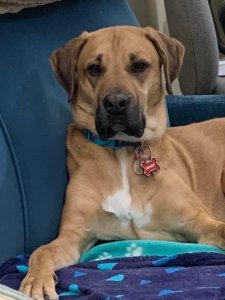